Earlier this week, FactSet reported that share repurchases for S&P500 companies amounted USD 134.4 billion during the second quarter of 2015. The buybacks decreased 6.9% compared to the first quarter. With the Federal Reserve postponing a rate hike last week, buyback levels may continue to be strong in the second half of the year, even helped by new issuance of debt. But can they support share prices?

Buyback programs are an easy way to increase earnings per share (EPS), since the outstanding number of shares is reduced. Many activist shareholders are therefore pushing managing boards to either distribute cash to shareholders by increasing dividends or by increasing EPS through buybacks. It is also believed that since buybacks increase demand in shares of a company, the share prices will benefit substantially (more on that later). The current environment of low interest rates makes it for a number of companies interesting to even issue debt to fund buyback programs. As traditional corporate finance teaches us: cost of equity is higher than cost of debt. In addition, for some major companies the interest rate paid is lower than the dividend payment obligation.

During the second quarter, the information technology (IT) sector was the leader in buyback programs. The sector spent a total of USD 35.9bn in Q2, with Apple being the sector (and overall) leader with USD 10bn of repurchases. During the last twelve months, buybacks by the tech giant amounted USD 41.6 bn, with dividend payments totaling USD 11.4bn. 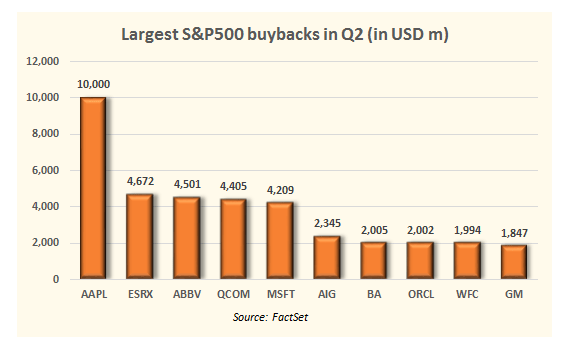 One noteworthy development is that companies spent more on buybacks than that they generated in free cash flow (FCF). FactSet noticed that the buybacks to FCF ratio exceeded 100% for the first time since October 2009. On a trailing twelve month basis, the ratio hit a level of 108%. The main reason is a decline in FCF. One might wonder if there’s still room left for further expansion of buyback programs or dividend increases.

As mentioned earlier, the standard line of reasoning is that buybacks should support the share price of the repurchasing company. However, during 2015 this was not the case. If we look at the S&P 500 and compare the index to the S&P 500 Buyback Index, which tracks the performance of the 100 stocks with the highest buyback ratios, we see a structural underperformance. In the graph below, the SPDR ETFs of both indexes are compared. 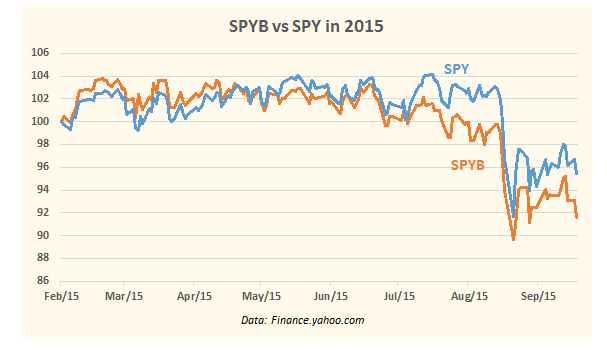 One might wonder what the underlying reason for this development might be. One possible explanation could be that investors are worrying that the continuing process of increasing buybacks financed by new issuance of debt, is deteriorating the financial strength of the companies. The equity part is shrinking compared to the debt position and thus balance sheets are showing a less prudent picture. In an expanding economy, this should be no issue when the company stays profitable and sees it revenues increase. However, in Q2 the S&P500 as a whole disappointed in revenues. In addition, when interest rates are low, investors are less worried about debt positions but with a potential rate hike getting closer, debt may be monitored more closely.

With buyback programs high for an extended period of time, the inflection point of lower effectiveness of this financial strategy is getting nearer. As the chart above shows, we might already have crossed that point. Companies should focus more on a sound balance sheet and investments in R&D instead of giving shareholders presents. The time may come when debt will again be an issue and the importance of earning real money returns.

Volkswagen Fraud… Time To Invest In VLKAY?
What does the ‘massaging’ of ISIS intelligence portend?