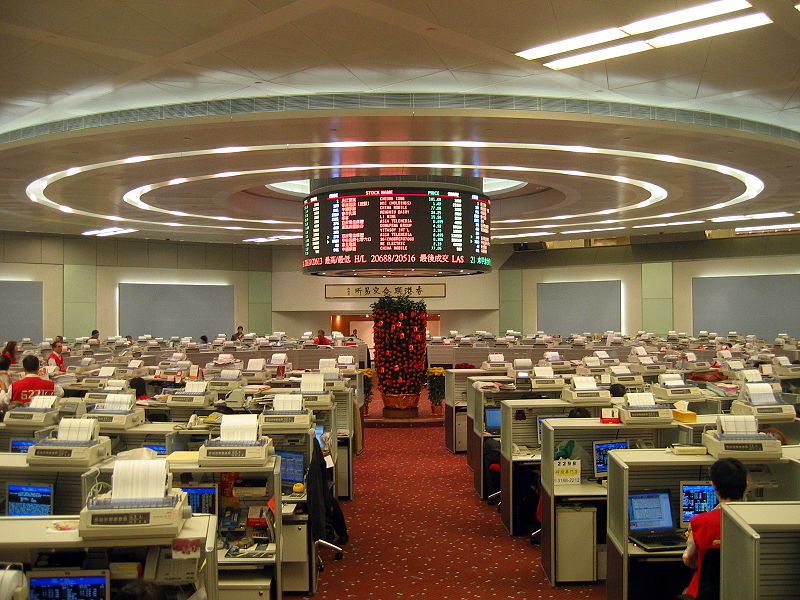 Much of the US market’s recent jitters have been caused by concerns that the Chinese economic miracle is suddenly collapsing. US markets remain volatile, there was big selling pressure to close last week, and now a huge reversal higher to start Tuesday’s post-holiday action.

China similarly led the way, with their markets taking another huge dive Friday, as measured by the A-Shares index ETF (ASHR). However, Tuesday, ASHR has powered the reversal in sentiment, posting a rather stunning 10.5% gain so far in morning action.

On the one side, bears say that China has grown too much, too fast, and with too loose a check on new investments. They claim that such hyper-growth, regularly in excess of 8% a year simply is not possible without a truckload of malinvestment. Videos of 100-story skyscrapers built overnight in the middle of Outer Mongolia would tend to support this belief.

This line of reasoning is compelling, and seems rooted in basic economic truths. Economies don’t normally grow anywhere near as quickly as China has done over the past two decades. While certain factors have aided China’s growth, their upward trajectory has still been unnaturally high.

Bears argue that, like in the US and Western Europe in 2007, the long bull market driven by excessive loans, too much real estate construction, and too many high interest loans to low-quality businesses will eventually cause a spectacular flame-out.

This is in fact precisely what happened in the US. So is this an accurate case of history repeating, or are the pessimists using the wrong playbook?

In the case of China, I’d say that while the same cycle is definitely at work, there’s clear overspending and excessive construction in uneconomic sectors of the economy, the result will not be a stunning 2008-style collapse, at least not anytime soon. No, I don’t think we are on the verge of a Lehman moment.

Some fundamental differences to keep in mind between the US/Western economies and China.

As such, when something novel hits the system, say a blistering 50% meltdown in the country’s stock market over the span of a couple months, people are left dazed and confused. Like drivers in Texas trying to deal with a freak snowstorm, the Chinese are not yet acclimatized to the sorts of sudden financial panics that are a mainstay of a normal capitalist market.

Thus, when markets started to tank, investors started wantonly dumping shares, often without any regard to valuation. The market is viewed much more as a casino than as a responsible way for growing long-term capital. It’s not surprising that a market heavily populated by new and unseasoned investors who view it as more of a casino would be prone to wild gyrations.

And the government’s regulation of the situation hasn’t helped matters. Reflexive actions such as banning short selling, halting hundreds of issues for many days at a time, and forcing pension funds to buy the market just reek of poor heavy-handed regulation.

However, that government heavy-handedness does come with an upside. China can, does, and is using its truly gargantuan balance sheet and concentrated state power to manage the market’s decline.

With a fortress balance sheet holding trillions of sound US dollar denominated assets, low inflation, and vast power concentrated in the central government, the Chinese state is ideally equipped for the role of stabilizing a falling economy, regardless of whether or not that is the right action in an economic, moral, or ideological sense.

If GDP were to start to decline, the Chinese can, and likely will spend hundreds of billions of dollars on new infrastructure, jobs programs, and other such things to keep the economy humming. Their government, unlike in a multi-party democracy, is much more vulnerable to economic populism fomenting against them if the financial tides stay low too long.

And China, it must be remembered, has a massive savings rate, they have among the highest rates of domestic capital in the world. While there can and probably will be gigantic losses from misplaced bets on real estate and Chinese equities, among other things, it’s unclear how badly these losses will actually hit the economy.

Given the high rate that domestic savings were used to fund the boom, it’s quite possible losses will merely be shifted around inside of China, rather than causing much pain outside the country to foreign holders and creditors.

So in sum, yes China is experiencing a major economic slowdown. The stock market remains volatile there and will likely continue to be as new and confused investors react emotionally to stomach-turning gyrations.

But unlike the US, the Chinese government is taking strong concrete measures in the way a one-party government can do to head off the impending bust. Will it work completely? Probably not. Will it be enough to avoid a Lehman moment and massive recession? Yes, it probably will.