The corporate world is often regarded as a cold place were results matter, not the human factor. But as highlighted in our article on ESG, soft factors seem to matter as well. Now, British consultancy firm Lady Geek ranked the most empathetic companies. In a study for the renowned Harvard Business Review, CEO Belinda Parmer found that being more empathetic also means better results. The top 10 most empathetic companies generate 50% more earnings than those ranking last. The technology sector seems to be the most empathetic, with 5 out of the top 10 being technology companies.

Ms. Parmar of Lady Geek used an algorithm to measure the empathetic scores of corporates. The algorithm identified “weighting criteria that are most consistent with a focus group of people who were asked their perceptions of the companies”. Sources were for instance social media interactions from Twitter and Reddit. Half a million tweets were analyzed in a four-week period. Also qualitative feedback from Lady Geek’s own Opinion Leaders panel survey were used. But the impact of controversies, such as scandals, fines and complaints were taken into consideration as well.

Microsoft leads the list with a score of 100%, with Facebook and Tesla Motor coming second and third, respectively. This was even before Facebook’s Zuckerberg decided to donate the larger part of his fortune to a good cause. Carmaker Audi holds a respectable 10th place, despite the recent scandals hitting its parent company Volkswagen. Probably the scandal did affect Audi as well, since it dropped from the no.3 spot last year. Surprisingly, social media firm Twitter ended at place 41, with a score of only 55.8. To be fair, the company did improve on its empathy, since it ranked 91st in 2014. Stiff upper lip, as the British say, doesn’t imply empathy. Well, that is also be reflected by British firms who are crowding the bottom of the list. UK-based JD Sports Fashion ends the list with a score of 0.0. 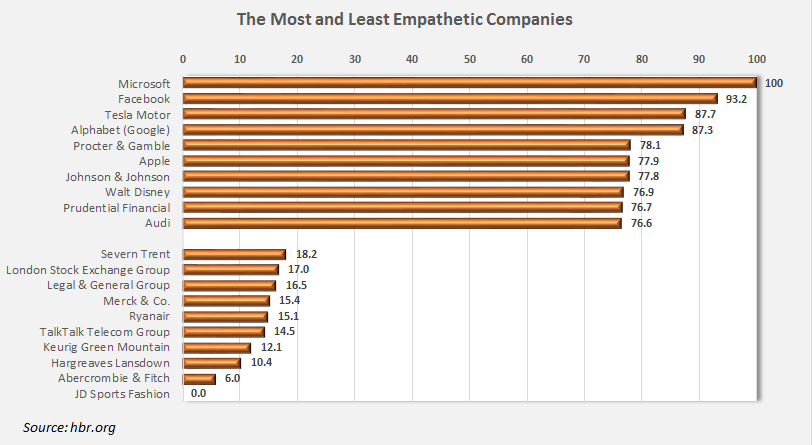 Why is a good score important? Well, authentic brand interactions with consumers could enhance long-term relationships. Also empathy with employees could enable higher productivity. Good relations with other stakeholders prevents scandals that obviously hurt a brand. Overall, being empathetic might drive revenues. The figures seem to prove this line of thought. Market capitalization of the top 10 rose with 23.3% compared to an average 5.2% for all mentioned companies. Next to this, average earnings among the top 10 rose with 6% this year, whereas the bottom 10 saw earnings decline 9% on average.

However, one might question if better results are a direct cause of empathy or that it works the other way round. Companies with more resources could engage more in empathy. In addition, recent scandals may hurt a company strongly in short period of time, whereas one or two months later, when things don’t turn out as bad as expected, integrity and empathy could be restored. Furthermore, although some empathetic criteria may be generally accepted, there’s still a risk of cultural interpretations. Also the value of social media interaction may be perceived differently across various age-groups. Soft factors are much more open for interpretation compared to hard data.

Nevertheless, a bit of common sense would also explain that companies with a high empathy ranking score better on earnings. After all, a happy customer is a returning customer.

Shkreli Behind Bars: Hedge Fund Genius Revealed To Be Con Artist
A Russian Gas Embargo Against Turkey Could Be An Opportunity For The United States