One of the most significant developments in investing and asset management during the recent years was the rise of the Exchange Traded Funds (ETFs). Whereas traditional mutual funds are actively managed, ETFs are passive funds tracking an underlying asset or, as in most cases, an index such as S&P 500 or MSCI Emerging Markets. During the stellar growth, a large number of ETF-issuers has developed, but iShares (Blackrock), Vanguard and State Street Global advisors are obviously the leaders. Now, Goldman Sachs (GS) wants to join the party. The question is, will there still be a piece of the pie available?

Since the first ETF was launched by State Street Global Advisors in 1993, total assets under management (AUM) rose to USD 2.7 trillion worldwide as at year end 2014. The US ETF market is the largest with AUM of USD 2.1 trillion per May 2015. During the last 10 years, AUM rose sixfold (see image below, source: Investment Company Institute). 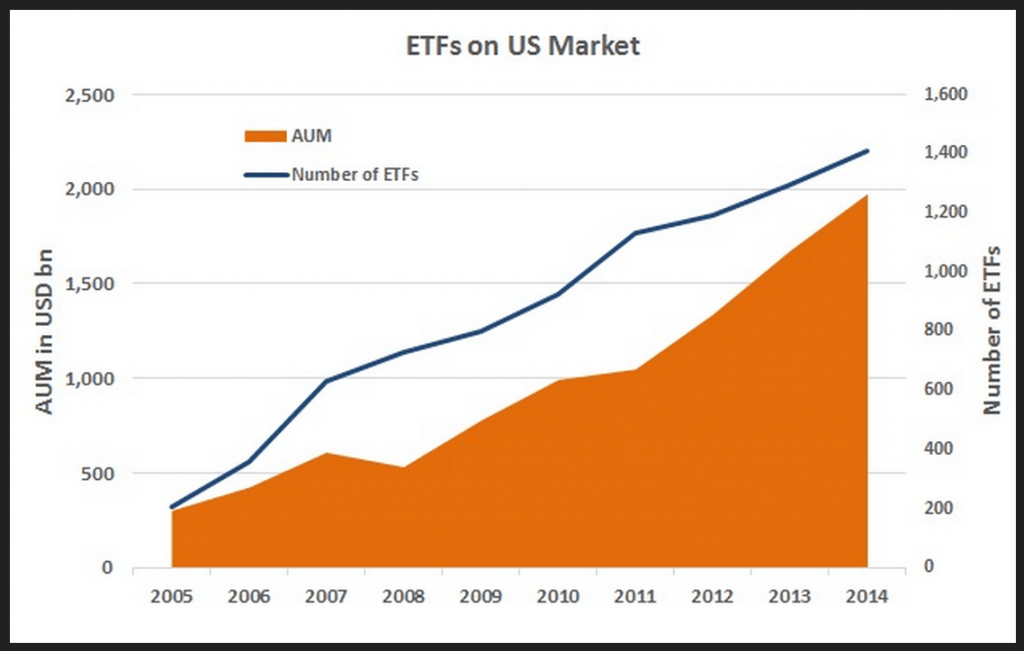 Currently largest ETF is SPDR’s S&P 500 ETF (SPY) with USD 172.5bn AUM. iShares equivalent (IVV) holds USD 66bn and Vanguard’s S&P500 (VOO) USD 35bn, so over USD 275bn is tracking the S&P500. All three charge less than 0.1% fee. Bloomberg reported that GS is looking for even somewhat lower fees, according to a regulatory filing early September. This means that GS is also looking for significant sizing. ETF is a volume-driven business where only niches are able to charge higher fees, but mostly still far below 0.5% to have a competitive advantage over actively managed mutual funds.

See also  Is the Bottom in for Crude Oil?

The ETFs Goldman Sachs will offer are not fully passive, but will be based on ‘active beta’-strategies. This means that the composition of the ETFs is based on valuation or growth instead the basic market capitalization or share price of underlying assets. GS will start with a US large cap and a small-cap ETF, as well as ETFs with exposure to Europe, emerging markets, Japan and one global oriented TF. The active beta strategy should give an advantage over other passive ETFs. An increased exposure to beta means that underlying shares will move stronger than the index in which the shares are included.

Goldman Sachs is already active in the mutual fund industry, with USD 239bn in AUM. It is likely that part of these assets will flow to the ETFs, so plenty of scale is likely. Furthermore, newcomers proved that there’s still room for inventive ETFs. For instance, PureFunds ISE Cyber Security ETF (HACK) which saw its AUM growing to over USD 1bn within a year. Also Canadian asset manager BMO was able to attract multiple hundred millions for its 5 new ETFs earlier this month. Although the ETFs will bring in lower fees per dollar under management, we can be sure that Goldman’s new products will be a success. The pie is still growing.

Bill Clinton’s attempted speaking engagement with Iranian group raises questions
Fed Decides: But Not Much Clarity For The Market’s Outlook