During it latest event, tech company Apple failed to surpass investors’ expectations. The company from Palo Alto introduced many new versions of its highly successful products, but received a lukewarm response from the market and followers. In addition, many watchers are wondering if the company can produce a new game changing product, as it did with the iPhone and iPad. The iPhone is seeing a decline in growth rate and saw a decline in sales before the launch of the 6s. Nevertheless, the question arises is the company still on top of its game and will the shares outperform the market.

At the Apple Event of September 9th, the company showed a range of ‘new’ products. All products were updated and/or upgraded versions of its blockbusters, such as:

The remarkable thing was that the iPad Pro, despite its stellar specs and looks, seems to be a catchup to competitors. The Pro comes with a 12.9 inch display, where its main rival Samsung already offers a 12.2 display version for a longer time. Also the introduction of a stylus, pardon, Pencil, is a bit odd since in 2007 the late Apple-founder Steve Jobs was very skeptical about this accessory competitors offered. Now Apple joins this party very late. And then there’s the Apple TV: a relatively low-margin product in a field with fierce competition where it’s hard to have unique features. Currently Rovu has roughly a third of the market and the Apple TV doesn’t have a unique proposition, since the products are content-driven. To summarize, without the launch of a new game changer, we might wonder were the next impulse for the company’s shares may come from.

Let’s not take a deep dive into Apple’s fundamentals, but look instead to its graph and view it from the point of Technical Analysis. To get a clear picture of its long term development, we take a weekly chart of the last 6 years. In this way, we can consider the impact of the iPad (launched April 3, 2010). During this period, we basically see 2 major bull runs: up to fall 2013 and the second from July 2014 until this year when Apple’s shares set an all-time high. During the recent turmoil, shares dropped back to the previous top of April 2012, which seems to offer a strong support. In the recent weeks, shares recovered. The peak of fall 2014 is likely to act as a resistance. In this case, we will witness a text book example of a head and shoulder-pattern. Left shoulder (LS) and Head are clearly visible, whereas we have a nice indication where the right shoulder (RS) will end. 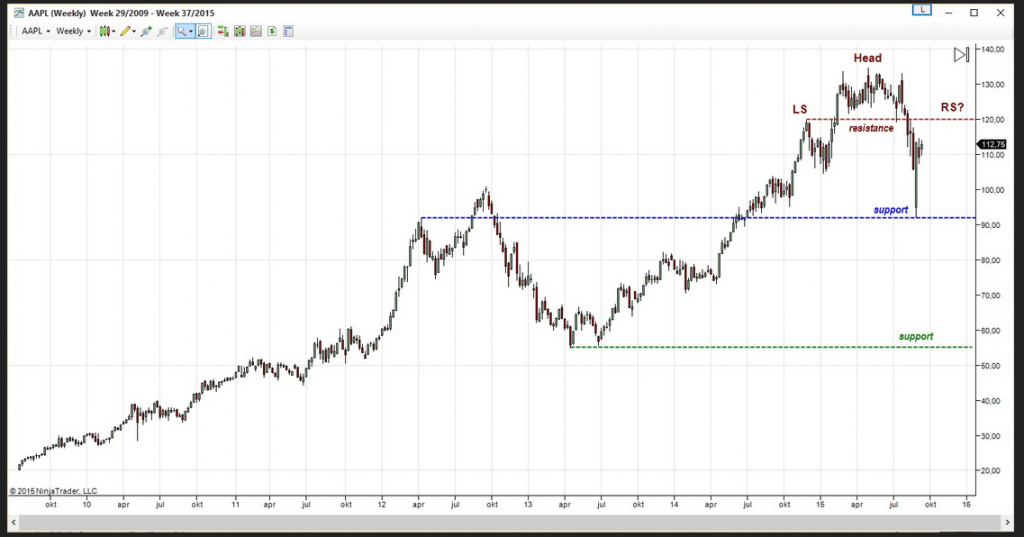 How to trade Apple

For long term investors in Apple who have been holding the shares during the last few years, it may be the last opportunity to sell Apple at decent prices if one is convinced of the success rate of the head and shoulder pattern. Shorters who seek for a long downswing in Apple may use current levels to start and add additional positions as long as the USD 120 is not breached. The head-and-shoulder pattern may be completed around USD 60-levels, the low in 2013 (green dashed line). But probably the investment case of the company, and likely the stock market as a whole, will be completely different at those levels, so a new analysis is recommendable when share prices will drop that far. If the resistance line of USD 120 is breached, the recent drop was just a correction and the long term bull case of Apple would be still intact. For now, shares of Apple are in a crucial situation which offer different trade opportunities.

The BDS movement aims at Israel, but hits the Palestinians instead
The Mining Bust Continues to Deepen: Who Will Come Out Strongest?