The largest ever Indian African Summit is wrapping up today in New Delhi. The three day event was part of India’s increasing efforts to tilt Africa toward its economic and political axis. India has long-standing historical and trade relations with various African countries, though in recent years, the rise of the Chinese economy has weakened India’s grasp in the region. 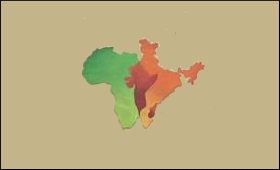 Both Africa and India in particular shared the common struggle of trying to break free from unwanted colonial rule. Since India’s independence, however, the country’s influence in Africa has faded.

India, particularly under its current Prime Minister Narendra Modi seeks to newly cultivate these ties with Africa, both to bolster India’s position and head off the threat of China capturing one of the world’s last large emerging markets.

India, by contrast, has seen its exports grow, rising from a negligible amount in 1998 to just over $20 billion now. That’s not a bad figure, it is equal to the EU’s exports to Sub-Saharan Africa, but it badly trails both China and the U.S.

China has risen to its current status with Africa with a cold economic approach. The Chinese have invested heavily in Africa, buying mines, land, and other raw resources with the focus on extracting commodities such as food, oil, and minerals and sending them home to China.

Given China’s lack of many of these goods, it’s a logical strategy. However, China’s efforts have often lacked diplomacy; they drive hard bargains, make punishing loans, and don’t offer a whole lot politically or diplomatically to bolster the African nations. In some countries, China has been compared to the new colonial master, who comes and takes the local spoils.

India, while lacking somewhat in the financial muscle that China currently sports, is offering a different approach for potential African partners. India seeks to build soft power, working together with African countries diplomatically to make shared efforts against problems both countries face, including terrorism, religious violence, environmental contamination, and poverty.

India is also working with African nations to vote as a bloc in upcoming World Trade Organization meetings regarding agricultural trade policy.

While India openly admits it doesn’t yet have the heft to replace China in the region, it at minimum hopes to offer African nations an alternative to China’s heavy-handed policies, and the west’s take no prisoners form of globalization.

African investment in India, turning to the other direction, has increased more than 50-fold over the past decade. It is a stunning number, however taking a closer look, you can see that just one African nation, Mauritius, accounts for more than 90% of that total investment.

This is due to a favorable tax treaty between India and Mauritius that has forged close bonds between their two economies. Indian foreign direct investment has been increasing rapidly in Africa, but again, it’s heavily concentrated to Mauritius. If nothing else, it shows the potential for cross-border investment opportunities between the regions if further tax and trade treaties are ratified.

Whether India’s efforts to integrate with Africa will be successful remains to be seen. While there are obvious benefits, there is also a major sticking point.

This stands in sharp contrast to where Africa wants to concentrate its economic development going forward. That said, China suffers from this same issue, as both countries’ economies rely heavily on manufacturing.

Africa has long been held as the next great investing frontier. So far these hopes haven’t yet been realized, but should the continent turn the corner, India is making sure it will be a winner out of the process.