One of the big market surprises so far in 2016 is the strong increase in gold prices. Since the start of the year, prices for the “safe haven” have increased with more than 15%. Therefore, the precious metal performed much better than the US stock market, which lost close to 4% this year. Even during the recent rally in shares that recovered a lot of ground of much deeper losses earlier, gold prices remained firm. What’s the story behind this renewed strength in gold? And is it time to go long gold?

Investors searching for diversification over asset classes in their portfolio, like gold for its inflationary hedge. In particular investors who are looking for capital preservation are charmed by gold. Although the precious metal has little industrial value (compared to platinum or copper), gold is seen as a store of value. Gold is regarded as some form of currency that can’t be influenced by monetary policy. Currencies are affected by monetary policies that aim to spur or slow-down inflation. In times of high inflation, the value of cash decreases over time, and central banks across the globe have inflation target of at least 2%. So that makes gold an attractive investment if one wants to protect the value of his/her portfolio.

Gold is a “safe haven” for more reasons than only inflation. As mentioned, it is seen as a store of value and is popular for capital preservation. That means, gold is very popular in times of stress, i.e. when markets move into “risk-off”-mode. We mentioned earlier that there’s a risk the stress in the energy sector turns into a full-blown default cycle. This is very negative for stocks and debt instruments, pushing investors towards safer asset classes such as gold. So there’s the explanation for the strong rally in January and the first half of February. However, sentiment turned for the better lately, with a rally in both stocks and (high-yield) debt. Gold only moved slightly lower: the precious metal lost 4% of a 20% rally, compared to a stock rally of 7% after a 10% correction. So either the stock market rally is considered ‘light’ by investors or gold investors have more reasons to be stick to their precious metal.

Despite pressure on the reserves of emerging markets, there’s still keen interest in gold from countries such as Russia and China. The Central Bank of Russia bought 20 tonnes of gold in January and currently holds over 1300 tonnes of gold. There’s a lot of pressure on the CBR to support the Ruble, for example by selling reserves. Adding gold to the reserves seems a bit odd. Some analysts say President Putin seeks to show Russia’s power by reducing Dollar dependency (as mentioned, gold is seen as an independent currency) by propping up its gold reserves. The People’s Bank of China is said to have increased its gold reserves as well.

But that’s not the sole reason for interest from China. Also Chinese investors and the Chinese public could have a good reason to go long in gold. The Chinese economy is slowing down and as a result, further depreciation of the Chinese currency, the Renminbi, is likely. Therefore, transferring currency into gold may be a wise decision.

Being a safe haven, the largest risk for gold is an environment of strong economic growth across the globe with inflation rates remaining modest. As we’ve seen in the past, gold shows a clear underperformance when investors position for growth. Although the US economy shows reasonable growth, it is unlikely that the rest of the world will show similar expansion. China is still in a transition phase and Europe shows a sluggish development. However, when this turns or positive surprises appear, gold may suffer.

Gold biggest problem may be its current price. It’s far from cheap, it’s even darn expensive. Compared to other commodities, it is the most expensive relative to a 15-year period. It is 25% above the 15-year average. Against oil, gold even trades at its highest ratio since more than a century, analysts from Deutsche Bank recently warned. This isn’t a huge surprise, since oil dropped significantly. Nevertheless, this may offer interesting long term pair trade opportunities as well. Investors could overweight oil over gold, even if they stay long gold.

The weekly chart for gold shows an interesting picture that urges for some caution before jumping the gold wagon. As showed in the chart below, gold prices are now at the top of a channel within a downtrend. Prices bounced back recently, and a temporarily cooldown is likely. However, once prices break out of the channel, there’s a lot of upside. Until then, patience is advised. 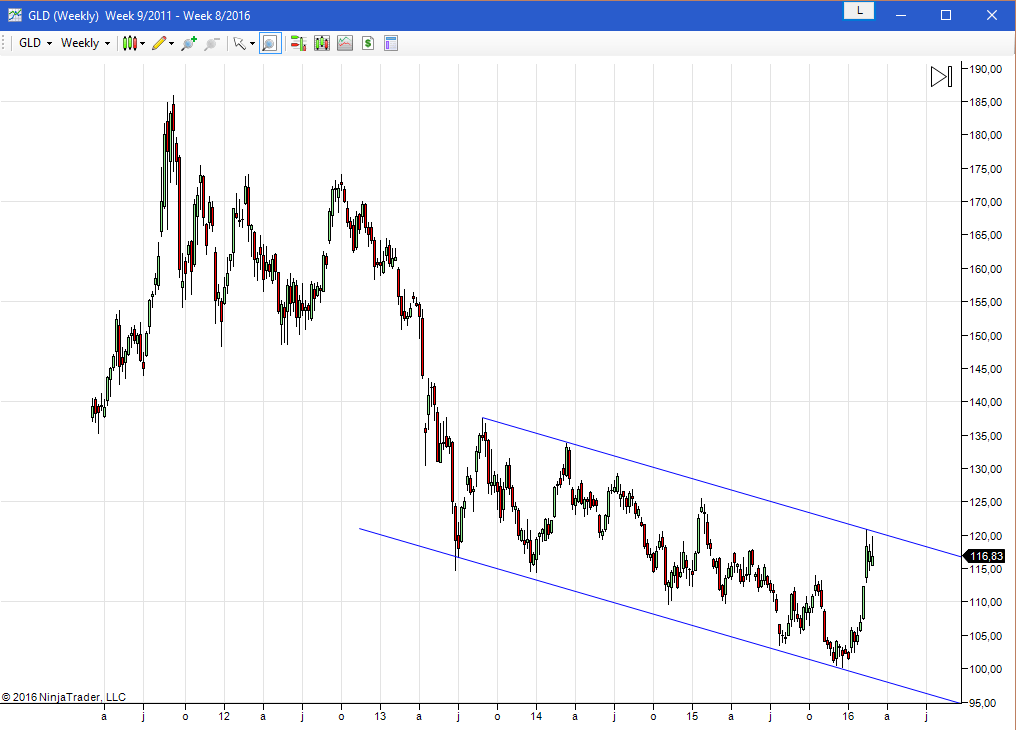 Brace For A Recession And A Bear Market?
Adidas vs Nike Stock