During the last decades, global companies saw their profits rising in record pace. On the back of globalization, many companies could expand into new markets. In addition, technological progress was a major driver for companies becoming more efficient and profitable. These developments were unprecedented and corporates enjoyed a golden era. According to consultancy firm McKinsey in a new study, this era may have ended and companies should brace for more competition. Whereas globalization first was a huge opportunity, corporates in developed markets will now face the other side of the medal facing competition from their emerging counterparts.

The share of global corporate net income increased substantially during the recent decades, notes McKinsey. In 1980, global corporate profits were 7.6% of world GDP, increasing to 9.8% in 2013. During this period, Net Income tripled from USD 2bn to USD 7.2bn. 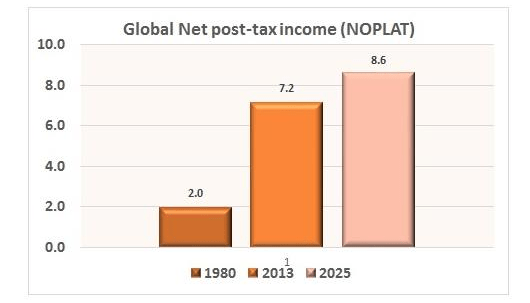 Companies benefitted from a shrinking cost base, rising productivity (however less in the recent years) and expansion of revenues. Roughly two thirds of profits came from companies in advanced economies. Interestingly, 10 percent of firms account for 80 percent of profits. However, during these years companies used the profits less for reinvestments but ended up hoarding up cash. In Japan, corporate cash holdings ballooned to 47 of GDP according to McKinsey. In the US, we can observe that activists are forcing companies to buyback programs or increase in dividends. Some part of cash is used for mergers and acquisitions (M&A activity), helped by low rates to increase deal sizing. Due to the M&A activity, the big corporates are getting bigger and bigger.

However, the steep upward slope in corporate profits is over. McKinsey estimates that the share of corporate profits in global GDP will decline to 7.9% in 2025. The reason for this decline comes from an increase in competitive forces. A major competitive force will come from emerging companies. Companies founded in emerging countries are getting scale, sometimes helped by government support.

Crucial factor is that companies from emerging economies are aiming revenue growth and are less interested in maximizing returns on capital, according to the consulting firm. A second threat for corporates come from disruptive ideas and companies which are ‘blurring boundaries’, such as Amazon and Google from the developed countries, but also for example Alibaba and Tencent from China. Due to technological developments, digital platforms offer many small- and medium sized companies global reach. This is of course a development a true capitalist loves. Nevertheless, more competition means pressure on profits.

Being true to its consultancy mission, McKinsey offers a number of advices (which its consultants with no doubt may implement for many firms). Think of adapting to the disruptive (technological) forces, seek patient capital and stay agile. But one is wondering whether many global corporates in the US made an huge judgement error in serving shareholders wishes. The record buyback programs and dividend increases in the recent year prevented investments to make companies more competitive. The cash hoarding led to better credit ratings, but prevented flows to R&D to find new products or improvements. The M&A activity led to bigger companies, but probably a lot of value has destructed. As some studies point out, a majority of mergers fail to materialize potential boosts in performance. In addition, maybe small is beautiful in the new era. Small companies are forced to adapt rapidly to changing environments and due to the small size are also more flexible in doing so. One way or the other, we certainly face interesting times in the global corporate environment.

Was That The Apple Top?
The BDS movement aims at Israel, but hits the Palestinians instead