It’s the favorite toy for many boys and girls all over the world: the bricks of Lego. The Danish toymaker Lego, started in 1932, overtook Ferrari earlier this year as the world’s Most Powerful Brand, according to consultancy firm Brand Finance. The small bricks are big business: in the first six months of 2015, total revenues reached DKK 14.1 billion (USD 2.2 billion), up 18% compared to the same period last year. The company is still privately owned by Danish family Kristiansen. Lego is active all over the world and particularly demand in Asia is rising fast. So fast that the toymaker announced to enlarge three production facilities. However, this may not be enough and a potential shortage for the Holiday Season looms. It is not clear which countries will be affected.

The huge success of Lego these days is a remarkable turnaround. Everybody may know the bricks which can be used to construct everything we can imagine, even a full-scale house. But only 10 years ago the company seemed finished. Lego suffered huge losses and its leisure parks, Legoland, faced declining visitor numbers. The four Legoland-parks were sold and the company returned to its core: the production of the small plastic toy bricks. Fun fact: in 2006 the company was declared biggest tire producer by Bloomberg BusinessWeek, since it produces almost 306 million tires per year. Lego produces 60 billion elements and 500 million new Lego mini-figures per year. Chances are that you own at least 100 Lego bricks (of the 760 billion ever manufactured), 102 is the average for every person on earth. 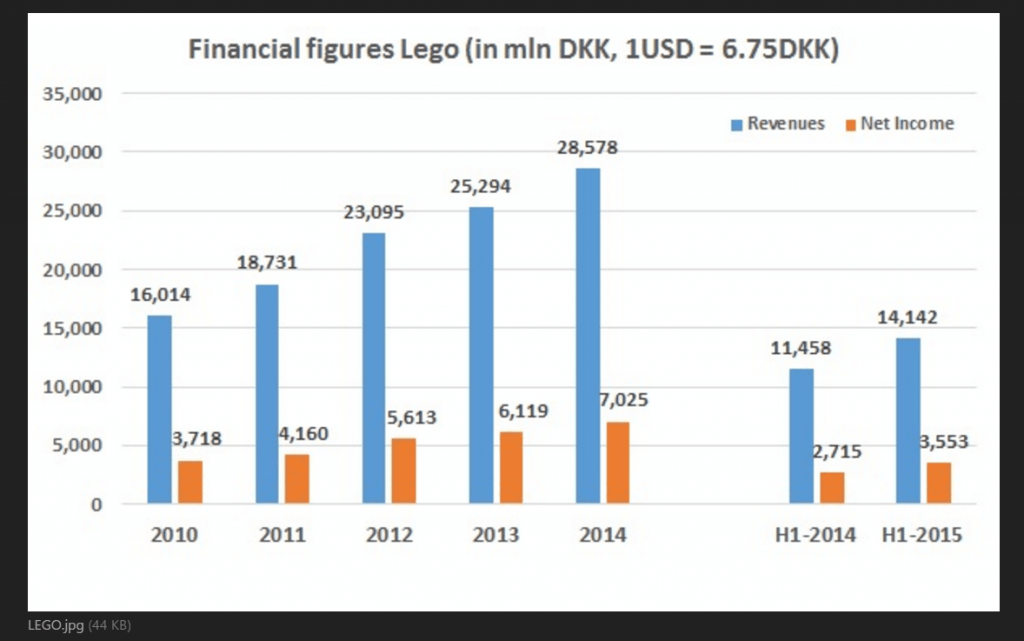 A huge boost in sales is provided by the various themes and the aforementioned LEGO Movie products. In addition, with its Lego Friends products, introduced in 2012, the Danish toymaker is able to successfully target girls. Although a large number of girls will admit they also play with the basic bricks. The potential bottleneck for this year’s Christmas is the release of the new ‘Star Wars’-movie in December. Even though the Lego products based on this movie are already in stores, an additional boost in sales is expected when this movie will be played at the theatres. Star Wars is one of the hottest licenses in the world of toys and a guarantee for success.

The company admits it underestimated the strength in demand. Due to the success of its LEGO Movie products, factories are running at maximum capacity. Therefore, large investments will be made for expansion of the production locations in Mexico, Hungary and Denmark. The Mexican factory, located in Monterrey, will get an additional 190’000 square meters and will hire 3000 new jobs up to the ear 2022. Since 2010 the Danish toymaker expanded its global workforce with 50%. Recently the expansion of Lego’s manufacturing site in Czech Republic was taken into operation and the location in Hungary rented an additional production hall. A first factory of the Danish brand in China is under construction, but will be fully operational no sooner than 2017. Up to then, a number of boys & girls from various ages may be disappointed this Christmas…