Today Norway’s Central Bank, Norges Bank, surprised the markets by cutting its main interest rate from 1% to 0.75%. As a result, the Norwegian crown (NOK) declined sharply with more than 2% against major currencies. Against the USD it was traded at a 13year low. The Central Bank cited continued low prices and its effect on the Norwegian economy as a concern. This is a major setback in Norway’s traditional reputation as a safe haven. 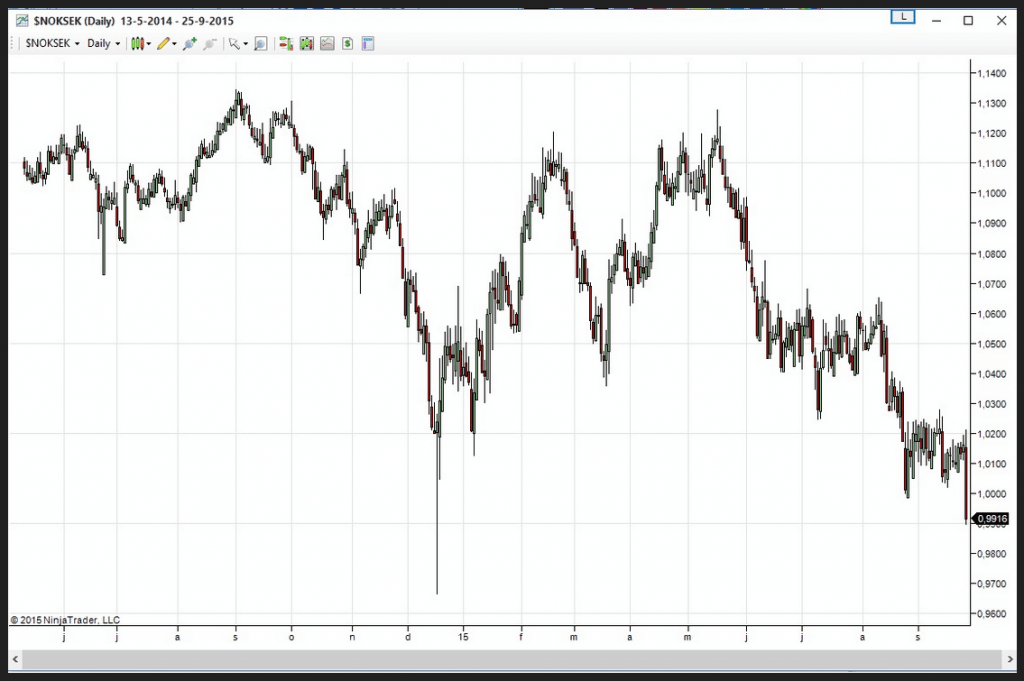 Traditionally, the NOK, the Swedish crown (SEK) and of course the Swiss franc (CHF) are considered as (Europe’s) safe havens. Historically, the NOK was higher valued compared to the SEK, but more or less were highly correlated. Today, the NOK/SEK dived below parity (see chart) and the trend is clearly unfavorable for the NOK.

The strength of the NOK was always explained by its strong commodity exports. The Norwegian economy was able to weather rainy days due to stable income from oil exports. The government could implement anticyclical measures by using its income from oil revenues. However, now with oil prices lower for an extended period of time, this is no longer possible. In addition, investments in the oil sector are less attractive with the current oil price. The supplying industry is therefore severely hit, dragging down the economy as a whole.

The rate cut is surprising, since underlying price factors do not support a more expansive monetary policy. In particular housing prices are a concern. Also consumer prices are rising due to a depreciation of the NOK. The Norges Bank states that a weaker currency may benefit exports, but academic literature shows us we can doubt this line of reasoning. On the other hand, further cuts might be possible since unemployment is rising and wage pressure is not to be expected. The Norges Bank said in its statement that the key policy rate may be reduced further in the coming year. This added to the pressure on the NOK today.

The likelihood of further rate cuts makes the NOK unattractive. Although financial markets are currently experiencing enhanced levels of uncertainty, it is unlikely that the NOK will be seen as a safe haven as it used to be in the past. Norway’s neighbor, Sweden might be a better place. The Swedish Riksbank’s main policy rate is already at a negative interest rate of 0.35%, further cuts are less likely. Sweden is also experiencing rapid rising housing prices and further cuts may lead to a housing bubble. For investors looking for a safe have, negative interest rates are not a problem as long as the currency is increasing in value. Traditionally, the Swiss currency is also considered as a safe haven, but the Swiss National Bank (SNB) could cause some headwind for investors. Governor Jordan repeatedly stated that the SNB considers the CHF overvalued and may intervene in the currency market. However, despite negative interest rates between -1.25% and -0.25%, international investors are finding the CHF these days of increased market volatility, albeit modestly. Another traditional safe haven, the Japanese Yen (JPY) is the clear winner.

The current developments in safe haven currencies are somewhat confusing. Especially since all safe havens also have very low interest rates. Fleeing to these currencies is in some cases costing money due to negative interest rates. This all may lead to increased volatility, since there is no one-fits all solution for this problem. Markets will react more heavily than normal on policy decisions and macroeconomic data. Maybe a good reminder that there is no such thing as a 100% safe investment after all…

What does the ‘massaging’ of ISIS intelligence portend?
It’s Time To Dig In To Caterpillar (Buy Caterpillar on Weakness)