The movie hasn’t premiered yet, but has already shattered a sales record. Four weeks before theatres will show “Star Wars: The Force Awakens”, it already passed the $50 million revenue mark, according to the WSJ. The previous record was set by “The Dark Knight” in 2012. Pre-sales of tickets started mid-October, but it is already clear that the seventh episode of a “galaxy, far, far away” will be a huge box office hit. The previous episodes brought in $2.2 billion in total at the box offices, but “The Force Awakens” is more than likely to pass that mark. It is even believed that it will break the record of $2.79 billion worldwide grosses set by “Avatar”. 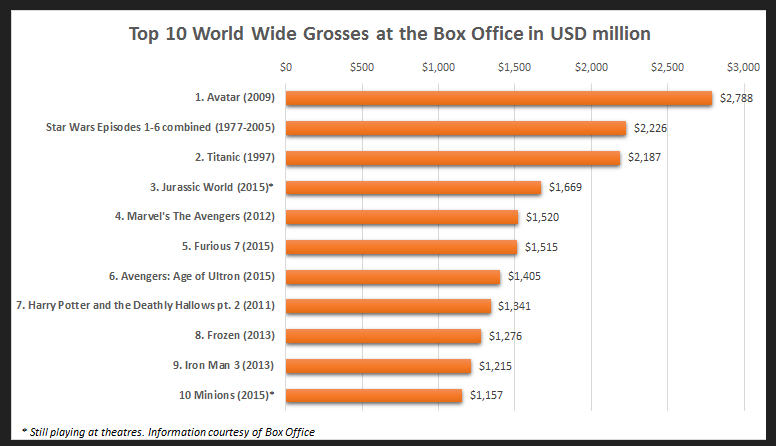 Surprisingly in the age of pirating and video-streaming services, 2015 brought us already 4 top-10 grossing movies. According to Box Office Mojo, the Best Opening Weekend ever was also for a 2015 movie: Jurassic World reaped in $208.8 million in its opening weekend in the United States. Worldwide this was even $524.4 million. Probably the new Star Wars will break this record. Next to that, the opening during the Holiday Season with many people enjoying days off, may give an additional boost to box office sales.

This is welcome news for Disney (DIS). The company bought the Star Wars producer Lucasfilm for $4 billion back in 2012. George Lucas, the creator of Star Wars, is no longer involved. The developments are also good for the shareholders of Disney, who have no reason to complain. Since the start of the year, shares of DIS are up by more than 25%, clearly outperforming the broader market (S&P 500: +1.5%). The company has already some big hits with ‘Inside Out’, which currently stands at worldwide gross revenues of $851.3 million. Estimated budget for this movie was $175 million, so the movie is more than profitable. With Thanksgiving, another potential big hit is released: animation movie “The Good Dinosaur” will tell us the story how the world would have looked like if the world wasn’t hit by a meteorite during the dinosaur-age. In addition, Walt Disney is the owner of Marvel Studios, which brought this year’s big hit “The Avengers: Age of Ultron”.

The other winner for 2015 is clearly Universal Pictures, with Jurassic World and Furious 7 in the top 10. The company is owned by Comcast (CMCSA). Also CMCSA-shareholders have no reason to complain this year: the stock is up by 10% and therefore outperforming the market as well. Shareholders of movie-businesses are living the Hollywood life…