Lately a number of mobile phone producers came with important news. Microsoft presented new phones on the top-end of the market. Samsung raised its outlook. Sony said it set a make-or-break date. What is going on in the mobile phone market and will we see a complete different market in a few years from now? 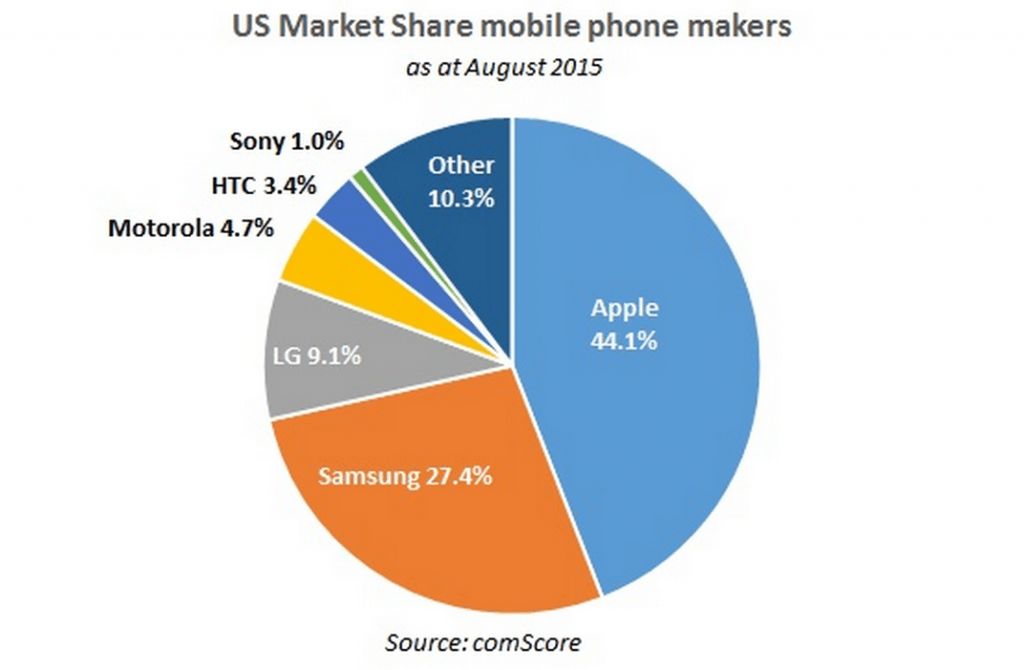 This week Microsoft presented its new Lumia phones with a quite telling proposition. The new Lumia 950 and 950XL are at the high-end of the market with pricings of $549 and &659. The Richmond-based company seems to give up the mass market and is preferring business-consumers. The phones can be connected to a PC-monitor and thus can be used as a PC. With the versatility of Office applications, this is an interesting move. Some might say Microsoft is aiming for a niche position, but that ignores the professional market which basically lacks a real business phone. Blackberry used to have this position roughly a decade ago with its unique email-functionality, but with the breakthrough of the smartphone there can hardly be anyone sighted using a QWERTY-phone these days (please send pics to us if you see one)… Let’s see if Microsoft can set a new tone for demanding business-oriented customers.

Samsung back on track?

Although according to recent numbers (see chart above) Samsung’s market share in the US declined further, the company came Wednesday with an improved outlook. The Korean maker of a wide range of consumer products expects a 80% year-on-year increase in its operating profit, totaling KRW 7.3 trillion or USD 6.3bn. This is considerably higher than previous estimates of KRW 6.7 trillion. Although analysts point to a foreign exchange advantage of KRW 300bn, Samsung appears to have offset the weakness in smartphones. Smartphone earnings may have improved thanks to new lower-end models, a market which is still very relevant especially in emerging and frontier markets. The company will likely also cut its prices for its Galaxy S6 models in Korea (maybe elsewhere too). But it’s uncertain whether the potential sales boost can offset lower margins. Interestingly will be of above mentioned new Lumia 950 can attack Samsung’s Note-models, which are at the top end of the market and used for business purposes. But back and forth, Samsung will likely remain one of the main contenders in the smartphone market in the near term.

Another smartphone maker grabbed attention these days: Sony. Albeit a very small player in the US with less than 1% market share, it’s still a major player in Japan with 17% market share. The Japanese producer is known for high quality products, although some might be still agonizing about the vulnerability of the Xperia Z2 screens… To a group of reporters, Sony’s Chief Executive Kazuo Harai marked next year as a make-or-break year. In July the company lowered its forecast for its mobile communications unit which is still making an operational loss. Harai said he believes the result of restructuring are starting to show in Sony’s electronic business, but that the company still needs to carry out restructuring in smartphones. In this fighter market with Apple being the untouched top dog, it is difficult to see where Sony could grab more market share unless it comes with a revolutionary concept.

As highlighted with the rapid rise and fall of Blackberry, things can change fast in the smartphone market. 10 years ago, nobody would expect the dominance of the iPhone. But what will we say in five years? If business usage of the smartphone increases, for example with on the road usage of business suites such as Microsoft Office, there might be a chance for Lumia phones. But 5.2”-5.7” displays on almost any smartphone, one could argue others can play that role as well. With probably less hardware innovation but more software-oriented development in smartphones, will Apple be dominant in the years to come? Place your bets now…

Is the Bottom in for Crude Oil?
Approval of the Trans-Pacific Partnership agreement will be complicated by presidential election year politics