One the largest decliners from the top-profile tech-shares is Yahoo (YHOO). Its shares are down almost 35% for the year. Not surprisingly, the pressure on CEO Marissa Mayer is building. Despite a return of over 100% during her tenure of almost 3.5 years, shareholders are not pleased with the current results. One of the most outspoken critique comes from Yahoo-investor Eric Jackson, managing director of Ader Investment Management: “The company and the shareholders would be better served with her leaving.” SunTrust-analyst Robert Peck shares a similar view and wrote recently to Yahoo’s board urging to let Mayer go. Why so much hate, one might ask.

Apart from the poor performance of Yahoo shares this year, the critics say that CEO Mayer is not able to deliver her promises. For example, last year’s statement that the acquisition of picture-blogsite Tumblr would add USD 100 million in EBITDA is unlikely to materialize. But the key target, to grow Yahoo’s core business (excluding acquisitions), is most certainly not achieved. Also gaining market share is a target which is not met. Compared to a share of 2.9% of global search ads, Yahoo’s position decreased to 2.1%. Investors were also not pleased with the recent results and guidance. Missing on revenues and EPS in Q3, the guidance for Q4 was well below analyst estimates. The company expects up to USD 1.2 billion during this quarter, where analysts were expecting USD 1.33 billion. For full 2015 the median estimate is USD 4.88 billion, after flat revenues of around USD 4.4 billion in the recent years. With a market cap of roughly USD 31 billion, Yahoo shares don’t come cheap with a price-to-sales-ratio of 6.5. Based on 2016 expected earnings per share of USD0.57 (median estimates), the price-to-earnings-ratio of 58 isn’t in the bargain-league either.

What’s holding the shares at these relatively high levels? The explanation lies in the performance of another internet-company: Alibaba Group (BABA). Yahoo is still owner of a large amount of Alibaba shares. In total, Yahoo holds 383.5 million shares which are currently worth USD 31.5 billion. That doesn’t mean shareholders get the core of Yahoo for free with a package of Alibaba shares. A spinoff of Alibaba in the current regime would be applicable to taxes. Yahoo is now in the process of working into a tax-friendly structure for a spin-off of the Alibaba-stake. This would save 28% taxes.

(Potential) shareholders in Yahoo might therefore consider two things: the stake in Alibaba and the core company of Yahoo. Betting on a change in management is risky as long as the spinoff didn’t take place. However, with the current harsh critique on the CEO it is likely that sooner or later Ms. Mayer will leave the company. Will this be enough for a turnaround in the business of Yahoo? That’s a big question mark, since competition in most areas where Yahoo is operating is quite strong. Essentially an investment in Yahoo at the moment comes down to a bet on Alibaba and speculation on a potential relief rally on a departure of CEO Mayer.

Nevertheless, the technical picture on the chart shows something interesting as well. Recently, shares hit a 61.8% retracement basically from the movement during Ms. Mayer’s tenure. A recovery from the 61.8% retracement is sometimes a signal for a new period of growth. Let’s see if that’s the case this time as well. 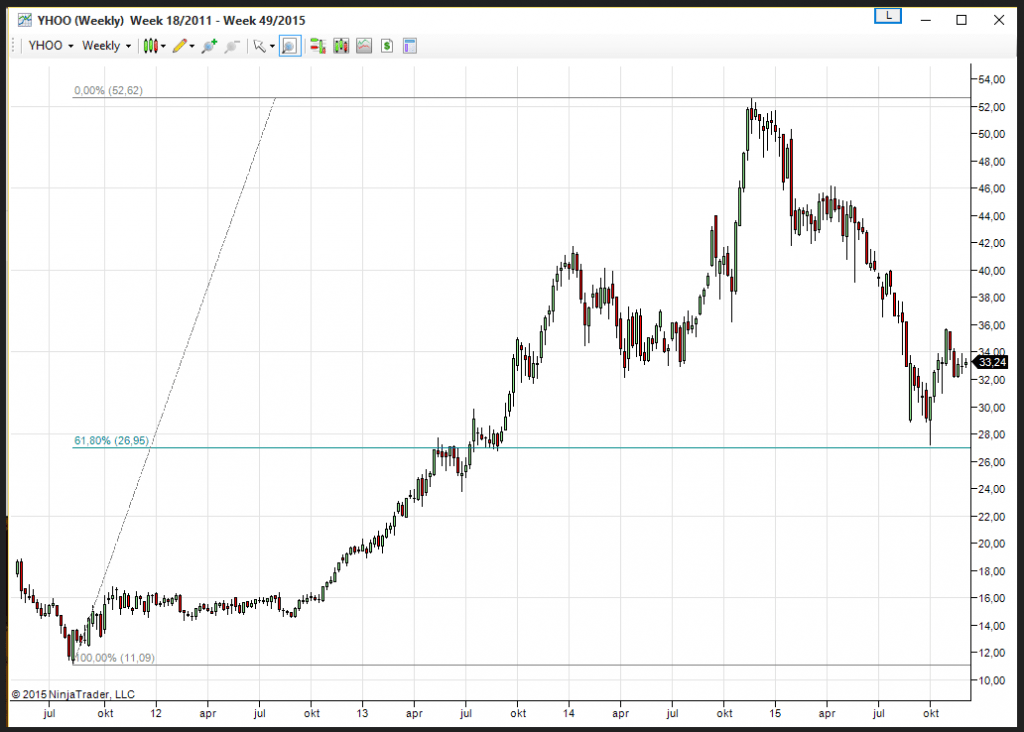